Spanning from the creation of the universe to its end, "Xenosaga". Mr. Takahashi has supposedly completed the big framework of this story already. [We will get to] glimpse a part of this in "Episode II". Where is this story headed...?

Interviewer: First of all, what's your specific position with regards to "Episode II", Takahasi-san? 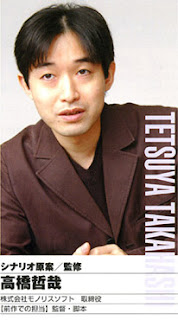 Takahashi: The original story and the scenario were the first [something]...or in other words, I made what would become the base [of the story]. I had a look at the messages included with the quest parts, but other than that I let those in charge of the cutscenes and gameplay parts take care of their respective tasks, allowing the younger hands make what they wanted to for the most part. With Arai serving as director for the first time, everyone were very reliable/level-headed, so I think I'll be taking the same kind of role for "Episode III".

Interviewer: How did you feel about the finished game when you saw it?

Takahashi: As the new organization spread, it had various meanings that led to corresponding projects, I think. Considering that, I think they did a pretty good job. For one thing, they've become more used to/better at the cutscene parts, and the designers' great efforts are really showing. That, and Yonesaka's scenario. Soraya Saga and I made the base parts of the original scenario, while Yonesaka turned it into a volume suitable for a game, heavily compressed it and brought it all together, and he also did a very good job.

Interviewer: So, are you saying the original plan for the "Episode II" scenario was much bigger?

Takahashi: Yes. But we're nonetheless planning to clearly depict and finish the main flow of the story featuring Shion, KOS-MOS and the others in "Episode II" and the upcoming "Episode III" that we've just started working on.

Interviewer: Out of the entire history of the "Xenosaga" world, roughly how much does "Episode I" and "Episode II" make up?

Takahashi: Far from being a part worth mentioning, the drama parts in the games are something more like a momentary "checkpoint". Honestly, there are important modules before and after them. We have absolutely no idea whether we're going to make works [note that he doesn't specifically say "games"] based on those parts, so...we should probably finish "Episode III" first, right?

Interviewer: Since "Xenosaga" will end with "Episode III", do you have any future plans?

Takahashi: Actually, I feel like trying to do something for younger people, including children. After all, if we don't recruit [lit.: raise] younger users, I fear the entire industry will go under sooner or later. That might go against the image of Monolith Soft in peoples' minds, but someone has to do it, so...

Interviewer: I heard you did a "Xenosaga study group" with the development staff...?

Takahashi: It's absolutely necessary to have an explanatory briefing every time. I give them information directly instead of keeping it vague. Maybe you could say I'm instructing them...? For example, if I gather everyone who has to do with the scenario, I consider it a scenario briefing. If we write down things like scenes and plans in a document, in the worst case scenario there's a chance it could leak. That's the kind of security I'm thinking about.

Interviewer: So the safest place to store data would be inside your own mind, wouldn't it?

Takahashi: If I should die, we'd have a problem, wouldn't we? (Laughs) In that case, if they take a look inside the PC at my house... That PC is stand-alone, so even if someone tried to get a look at the data from the outside they wouldn't be able to. If that PC breaks, we're in big trouble. 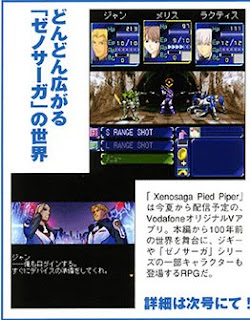 Interviewer: [Like the] Y-data, inside a computer that's not Momo, then...?

Takahashi: Right. (Laughs) But even if I said [I'm] "instructing" them, I don't tell them what to do about every little thing. Instead, I say "This is the recipe for the story, and you can make it [lit.: cook it] however you like". [He seems to like using cooking metaphors for story writing, for some reason...not the first time he does it]

Like I said in the beginning, there's many things we adjust before actually turning the original story into a game, so with that in mind I think it might be a good idea to get some input from other people. But we also want to elaborate as much as we can on the main games and give people more in-depth knowledge [about the series]. The first instance of that will be "Xenosaga Pied Piper (see the lower-right sidebar)". This is a story taking place 100 years before "Xenosaga Episode I", with a living Ziggy as main character. Apart from him, characters [relating to those] from "Episode II" will be making an appearance, such as the Patriarch's great-grandfather [among others]. Also, Ziggy's long-time enemy... So, when people play it, I think they'll appreciate [lit.: understand] some of the foreshadowing, such as why Ziggy is yelling towards the end of "Episode II".

I think we'll release more sideways expansions [of the story] like this from now on. These won't be side stories without any relation to the main installments, but rather elaborations on the main flow [of the story]. The main premise is to make each of them independently in an enjoyable manner, and by connecting each module with a vertical and horizontal thread [to the main story, I guess?], you should be able to gain a deeper understanding...that's how I feel about it. I think there will probably be various developments like that in the time before we're able to release "Episode III", so I'd like you to look forward to that while you're waiting. 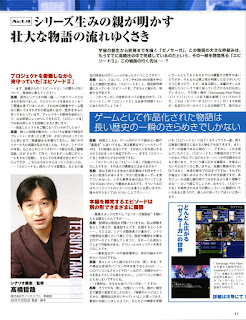