The following are some translations from the Xenosaga Special Fan Book with DVD.

"The majority of this translation has been done by Gwendal and another unknown translator. All credit goes to them. The parts that I have added/changed will be indicated by green."
- Lugalbanda

The deep themes behind the subtitle

The great epic spanning from the creation of the universe to its end, "Xenosaga". [This is the exact same sentence that was in the Dengeki interview for some reason]
The first episode is this work, "Episode I Der Wille zur Macht". That subtitle is the theme [of the game] and based on Nietzsche’s words that humans are necessarily propelled to the Will to Power.

Everything the characters do---ruling the world, trying to escape from the aforementioned rule, oppressing other people, or healing them---is due to "the will to power", and the reasons for their actions and the various things they're able to do are depicted according to that. [I think, this sentence got a bit complicated, but that should be the gist of it]
Here, we'll elaborate on those themes. 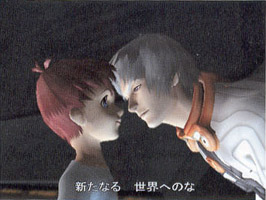 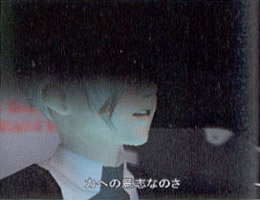 First picture, with the shadowy man: "The will to power, hmm?" [Or something like that, hard to tell without more context]. Second picture, with Jr. and Albedo: "Towards a new world...?"

"Episode I" story
This box is just a summary of Episode 1, as it says.

From the moment people are born into this world, they're ruled by various kinds of fear. And the characters in this work, too, are bound by fear in some way. Some try to escape from it, some try to conquer it [by facing it] head-on. While being a shackle for humanity, fear is also a driving force that makes humans, humans. Overcoming fear could be said to be yet another interpretation of the Will to Power. So then, could there be a way for humans and the universe to succeed in that, evolving as a conscious being? In this work, we find out answers to such questions as well.

Actually, there is one more hidden theme in this work. But before we get to that, I'd like to consider "cognizance towards the world" first. What we perceive as "the world (the outside world)" is merely a result of how the information we perceive is defined inside our heads. For example, if we should be deprived of all our senses [lit.: facilities of perception], would we be able to know that the world exists? The answer is a resounding "No". To humans, what we can't perceive might as well not exist.


A journey of inquiring into the "world system"

Can we really grasp the true shape of the world from the "cognizance" defined in our minds from the information brought by our senses? Can the origin/structure of the world become clear to us [this way]? Could The Zen notion of Shikisozekū (That all material things in this universe are merely a phenomenon, and do not have an unchanging state) perhaps be more accurately describing the world than quantum physics? Along with asking those [kinds of] questions, this work also invites those who perceive on "a journey of inquiring into systems for constructing the world".

As the Xenosaga series proceeds, there are two key characters. Their names are "KOS-MOS (order)" and "chaos (chaos)". [The last one is "chaos" Japanized to "keious", then the proper Japanese word for "chaos"]
Their roles are still shrouded in mystery, but their respective symbolic existences might be [a key] part of the fabric of this great epic.

The "Xenosaga prologue movie" and "Annoucement promotion trailer [lit.: image/movie, I assume they intend this to mean "trailer"]" recorded on the included DVD contain valuable information beyond what you could get from the official announcement.
In order to increase your enjoyment, we've made a special publication of the scenario containing facts you wouldn't understand just from the trailer. We hope you'll find the two of them useful in understanding the story. This trailer was shown at the exhibition in the metropolitan area [doesn't say which city] on the 8th of July and during the official announcement [presentation].

(Albedo):
So you acknowleged (it), coward!

[ Sustaining an attack from the enemy, the Elsa begins to crash down. The other members are collapsing into panic. A single person, chaos, lethargically leans against a wall of the cabin ]

(Nephilim):
"And then, you are holding another sorrow, aren't you?"

(next scene is the margulis/jin fight scene)

[ At the heart of U-TIC Organizaton's Research and Development facility ]
Along the way through the final route leading to Zohar, a fight ensues.

(Margulis):
It's been 14 years, eh Uzuki?
(Jin Uzuki):
If at all possible, I do not want to meet, but ...
(Margulis):
Bullshit. I'm surprised you are still alive, admist that upheaval.
(Jin Uzuki):
I hope we are of equal status in this regards ...... Colonel.
(Margulis):
It will be long! Uzuki! This sensation of euphoria!
(Jin Uzuki):
I was expecting you to say that! The heretical doctrine of a scoundrel, Grandpa's sword will abolish it!
(Margulis):
You're the one to say!! Junior!!

(next scene is the proto omega scene)

[ The room where the ultimate weapon rests: Proto Omega ]
All things pushed aside, the body of Proto Omega appears..

(Margulis):
"Hahahahahahahaha! You will kneel before the power of Omega!"

(next is the Abel scene)

[ An area that looks like an isolation ward ]
Within a completely white room, a boy in white robe is seated against the backdrops of the wall. His expression cannot be determined. His mouth moves. A noise that sounds like a scream can be heard, but with no feelings.

[ A hospital-like place (Or something like that) ]
Interior of a completely white room. A boy wearing white clothes is sitting with his back against the wall. The expression on his face can't be seen. He opens his mouth. Emotionlessly, he shouts, almost like a war cry:
"Ah, ah, ah, ah, ah, ah, aaah!"

[ A house in a garden ]
Night. Moths can be seen whirling around a candle. An acquaintance is shown on view, the view pans away from the aquaintance, and then back to the aquaintance again. The shadow from the other side overlaps chaos gently.

(Jin Uzuki):
"The outcome of the future changes alongside with time. When the Sacred Light is seen, people lose their original existence. This is ... "

(Note, there are more stuff in this Special Fan Book, including a DVD which includes footage from a MonolithSoft conference).