At the product presentation in early summer 2001 and during Tokyo Game Show during fall 2001, users had the chance to experience "Xenosaga" for themselves. Since it's [a game on such] a grand scale, there are probably quite a few users who still don't grasp the whole story. Surely, this isn't just any game. [I think] From the words of director and script writer Tetsuya Takahashi, we get closer to the full picture [of the story].
(This interview was done in early December 2001 and is a correction/update to the article published in the issue of Dengeki PS2 released on 21 December 2001).

The great epic spanning from the creation of the universe to its end, "Xenosaga". Until the game is released into the world, which is about 2 months from now and quickly approaching, the development team is at the stage of making their final adjustments. 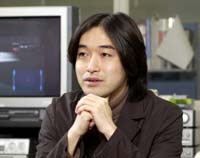 Takahashi: Roughly 7 hours and 30 minutes' worth of events [cutscenes] are 99% finished at this time ([Magazine's note] In early December 2001, they're already making the master now). On the other hand, as for the quest parts, everything to do with the maps is 100% [finished] and the characters are 100% [finished]. That's how I'd say I feel about it.

The person who's saying this is the director, Mr. Takahashi. He's the person who conceived this game, and as director he's the one who's bringing together/supervising everything and has been present for the whole process.

Takahashi: We [or I, hard to say for sure] created Monolith Soft in October 1999. At the same time, we began development on "Xenosaga." Or, that is what I'd like to say, but in the beginning we were scrambling to bring together talented people. So in actual fact, development began sometime around the end of 2000.

As a consequence of that, the actual development time should be about a year, I suppose? The scenario, character design, mechanics design and aspects like that were given priority and put in first. It felt like walking a tightrope at times, it was rather quick, wasn't it? (Laughs)

Magazine: As Mr. Takahashi was saying, development proceeded at a breakneck pace, and it's only a little longer until [the game's] release.
[They repeat the same thing from the introduction, about Tokyo Game Show and some users still not having the complete picture]
What kind of game will it turn out to be when it's finished...?

Takahashi: Basically, you'll be fighting enemies while exploring the maps and playing minigames while advancing through the quest parts, and when you reach important points, events [cutscenes] will begin. That's how the game will be organized. For the event parts in particular, we don't just have exclusive voices and animation, but also SE [sound effects?], all this exclusive content for all 7 and a half hours worth' of scenes. I would say this is probably the first time an RPG with such meticulously created events has been made for the PS2. With regards to combat, we're carefully incorporating [something related to the user], of course, so don't worry about that.

As for the BGM, we're including Gregorian chant, since religion is one of the fundmental aspects of the game, and I wanted to create that atmosphere. Of course, this is also something Mitsuda-kun requested. [The paranthesis has a basic explanation of who Yasunori Mitsuda is]
Between us, we agreed that in existing RPGs, the same music loops over and over during most events, so we tried to avoid that as much as possible. We decided to do our utmost to make unique music for every scene.

Magazine: That's a level of craftsmanship you wouldn't expect from just one year [of development time]. Of course, this development skill wasn't just used for systems or BGM. Mr. Takahashi's words continue.

Takahashi: I was in charge of the script while also serving as director, so naturally I began by deciding on the characters of Shion and KOS-MOS and working on the scenario. The characters have deeper personalities and more backbone than before [older games?]. Basically, the story proceeds from main character Shion's point of view, but we will also get the chance to switch focus to other characters, which is good. [A bit unsure about that last part, sorry]

From the position of having written the script---writing it myself---, something I like is the as-yet-unrevealed person known as "That man". Look forward to [hearing more about] that in future announcements (laughs). Also, you should keep an eye on the relationships surrounding the newly-announced Ziggy and Momo.

If I may, I'd also like to raise another point I've been careful about when writing the script, which is "not making a fuss over rhetoric or focusing on it too much."[No idea why it's in quotation marks, but that's how they wrote it in the original]
That is to say, since I feel there's sometimes a strong inclination towards that in games, I wanted to do it another way.

Of course, intentionally using rhetoric isn't [necessarily] a bad thing, but one trend, at least in my opinion, is that writers just include cool-sounding or moving dialogue without really thinking about rhetoric, and somehow the means end up becoming the goal. The message they originally wanted to convey doesn't get across. All the characters just end up becoming poets. In actual fact, when we think about how we live our everyday lives, it'd be strange if the people around us were like that, wouldn't it? (Laughs)

Considering the situations they're placed in, what would be the most natural thing for the characters to say based on their personalities? I'm constantly thinking about that when I'm writing. Even everyday language [lit.: language that is close to me/us] can leave a strong impression if it fits the scene. That's the kind of dialogue I want to have my characters speak.


This grand story doesn't go beyond one episode yet


Magazine: According to Mr. Takahashi's plans/plot ideas, this work doesn't go beyond one episode yet. The reason "Episode 1" is written next to the name is here.

Takahashi: All in all, I have enough plot material for about three times as much story as what we're making now. Considering our capacity, there's no way we could just abruptly make it all [right now]. (Laughs)
So, I think we should do it gradually. But in any case, the scale of this work alone is suitably large. The staff played through half the content the other day, and it took them about 14 hours and 30 minutes. So the playing time for the full game should be about 40 hours.

Magazine: Judging by the words of Mr. Takahashi, we have been able to find out more about what kind of grand story this work will tell. We have also been able to catch a glimpse of a number of individual/unique characters who will make an appearance.

Takahashi: Quite a few key characters appear in this work. Since these are characters who will be important to the coming story, I want [players] to start by getting a sense of their individual qualities. I'd like [players] to enjoy the reflective [maybe? A bit unsure about this word] parts before tearing into the gameplay parts. When I think about what else I want [players] to pay attention to, it would have to be the characters.

With this work, we've included foreshadowing and hints for the later story at every turn---from dialogue to character backstories to the setting, things that could be seen by a casual glance at the backgrounds---so as for what I'd like [players] to learn from this, the keyword would be to imagine how the near future might turn out. That would make me happy [if people would do that].

[The last paragraph got a bit complicated, so I'm not 100% sure there, sorry about that]